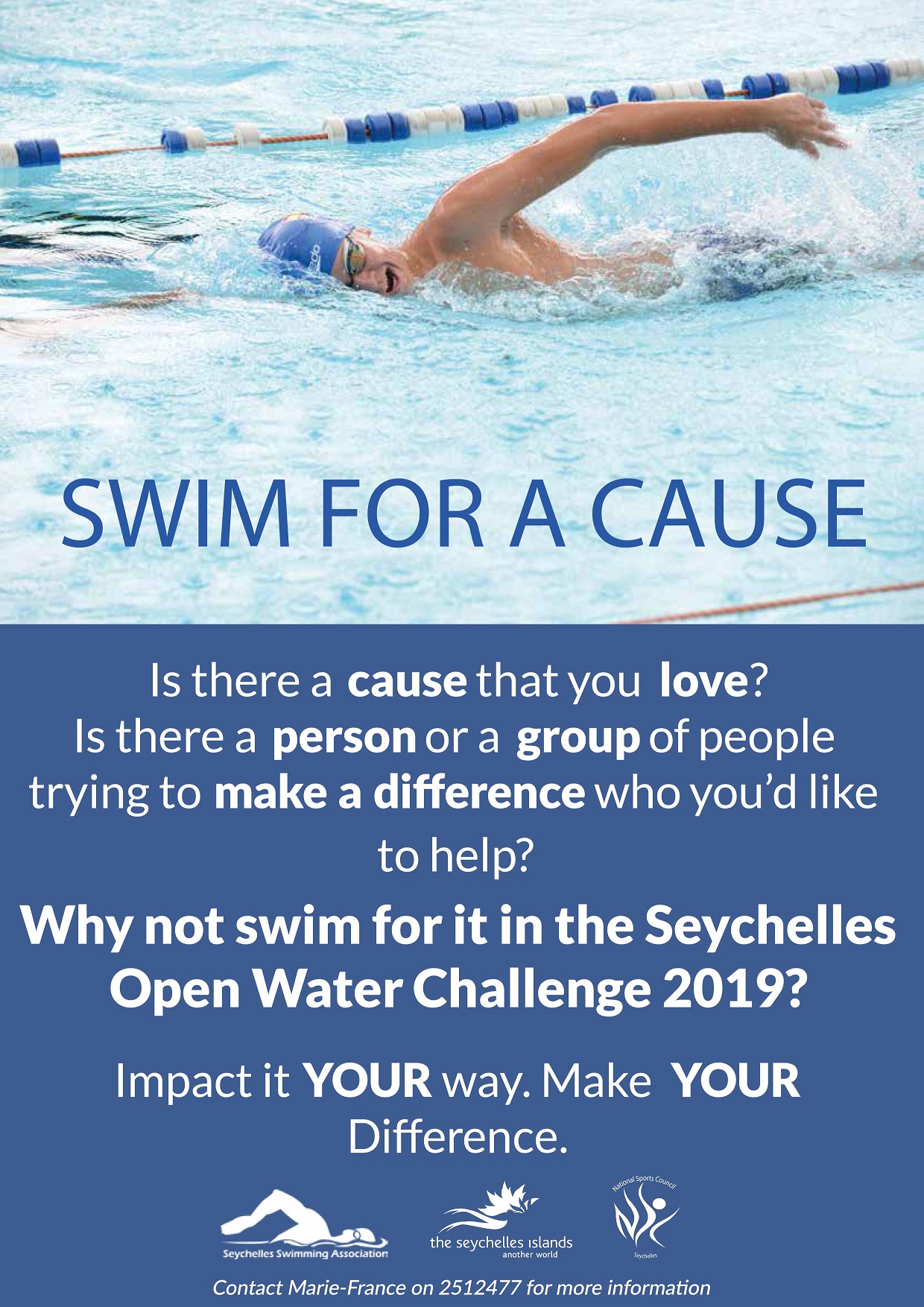 With only 15 days to go until Beau Vallon Beach, reignites the sparks from the first FINA events held on our shores in 2018.

The excitement is mounting, as the organising committee is fine-tuning its plan to make sure the event is a success.

On Saturday, May 11, one day prior to the Marathon Swim World Series 10 km race, the Seychelles Open Water Challenge will warm up the scene with eight races comprising of four distances where the public are invited to participate.

In the aim of drumming up interest for the event and in the spirit of raising awareness on the various issues touching our country, the organisers are calling on swimmers who may have a cause at heart to take the opportunity to raise funds and awareness by swimming for the cause at the Open Water Challenge.

‘Swim for a Cause’ is an opportunity for anyone taking part in the Seychelles Open Water Challenge to dedicate their race to a cause and raise funds for it in the coming days leading to the event. The targeted recipient of the funds can be an individual or a family who requires assistance or an organisation whose mandate supports a particular cause.

Swimming is considered by many to be one of the best sports in terms of its health and fitness benefits. In this light, ‘Swim for a Cause’ goes a step further and provides a great work out and a good dose of nature. In other words, swimmers get to make a difference while improving their own health and having fun!

Swimmers will battle out in four distances, 500M, 1000M, 3000M and 5000M in the event. With the exception of the 500M race, where only swimmers aged 13 and under can participate, the other races are open to all ages. There will be a men’s and a women’s race for each distance. Monetary prizes are already being given out for the first eight winners in each race.

Participants are advised to get in touch with the organisers to discuss their ideas and to have the support in their fund raising quest and publicity.

Seychelles will next year host the FINA World Junior Open Water Championship 2020, making it the first African country and small island nation to organize this event. Additionally, following the resounding triumph of the first-ever FINA/Hosa Marathon Swim World Series held on our beautiful shores in 2018, Seychelles will once again host the second leg of the prestigious swimming competition in May this year.

These official announcements were made during a press conference held on January 17, 2019, at the Savoy Resort and Spa in the presence of Mr. Maurice Loustau-Lalanne, the Minister for Finance, Trade, Investment, and Economic Planning, Principal Secretary for Youth and Sports Mr. Fabian Palmyre.

The press conference hosted by the chairperson of the Seychelles Swimming Association (SSA), Mr. David Vidot, also saw the participation of the two core governmental partners in the presence of Mrs. Sherin Francis the Seychelles Tourism Board (STB) Chief Executive and Mr. Jean Larue, Chief Executive of the National Sports Council (NSC).

The FINA World Junior Open Water Championship is an international swimming competition that brings together boys and girls between the age of 14 and 19, to race at the highest level.

“This is another historical moment for Seychelles as we are pioneering open water not only in Seychelles but also in the African continent,” said Mr. Vidot.

During her intervention STB Chief Executive Mrs. Francis commented that as a faithful partner of the open water competitions, STB will give its support to the event, adding that such sports competitions provide a great boost to the tourism industry.

“Such big events are broadcasted by major television channels and this is a way for people to indirectly discover the destination for the first time. We have noticed in the past that having international press cover such events has allowed us to receive more leverage and visibility as a small country with little resources,” said Mrs. Francis.
She added that all stakeholders in the tourism industry stand to benefit from such an event.

Commenting on the financial commitment of the event, the Minister for Finance, Trade, Investment, and Economic Planning stated that the government of Seychelles is giving its full support for the hosting of the event. He also took the opportunity to invite local businesses to join the initiative as sponsors and partners.

“It is important that Seychelles hosts such events to make sure that it remains relevant on the international scene as a country that is serious and engaged in sport. Sport brings about peace and most of all it develops the youth and places them on the right track in life,” said Mr. Loustau-Lalanne.

Mr. Loustau-Lalanne also added that the exact costing for the event has not been established yet, but that for the moment an estimation of about five to six million Seychelles rupees has been made for the event.

Mr. Vidot mentioned that ongoing discussions are still being held with FINA to establish the exact date that the junior championship will take place. He explained that the junior championship might be hosted during the week that follows the final race of the FINA/Hosa Marathon Swim World Series’ second leg. There will be three age groups and three distances – 3km, 5km, and 7.5km – under which participants will be able to compete.

The FINA/Hosa Marathon Swim World Series, which is anticipated for May 11 and May 12 this year, will be the second event of a four-year agreement with FINA for the international swimming event.

“At the moment, we are hoping to host it back to back with the world cup series as both events will be hosted at Beau Vallon. This will allow us to make the most out of our resources,” said Mr. Vidot.

In 2018, the first Seychelles edition of the FINA/Hosa Marathon Swim World Series was won by an Italians duo Arianna Bridi and Simone Ruffini who came out as the winners of the women’s and men’s race, respectively; leaving around 50 other world class swimmers from around the world envious of winning in the pristine waters.