Having in the past been overlooked by many tourists in favour of their more famous neighbours, Nakhon Si Thammarat and Phatthalung are now gaining more attention and deservedly so.

Nakhon Si Thammarat was an important religious and cultural centre in Thai history and offers visitors a mix of history and heritage, culture, cuisine, nature and beautiful beaches along its over 225 km of coastline.

Phatthalung offers plenty of nature that includes internationally protected wetlands, locally-made sedge weaving products that are growing in demand, and its own cuisine and culture.

Leicester City supporters visiting Nakhon Si Thammarat will be interested to know that traditional tie-dyed fabric made by the Bai Mai Group of Ban Khiri Wong was used in the English Premier League side’s latest jacket collection. The Group has since reported a subsequent spike in sales of various items it makes; such as, shirts, trousers, bags and hats – all of which are naturally dyed using extracts from trees and fruits grown in the village. 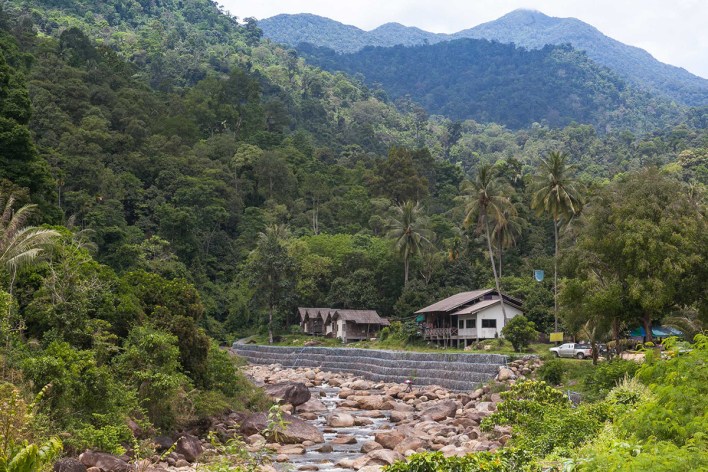 The award-winning Ban Khiri Wong is nestled at the foot of Southern Thailand’s tallest mountain – the 1,835 metre-high Khao Luang – and is considered an award-winning community-based, environmentally sound tourism model. Visitors can enjoy local craft and agricultural activities, and the various fruit grown here like durian, mangosteen and rambutan is said to be some of the best in Thailand.

Ban Khiri Wong is also the starting point for a three-day trek to the summit of Khao Luang, which sits in Khao Luang National Park. Stretching over 570 sq. km of forest, there are several waterfalls here that can be visited and hundreds of wildlife species to look out for – pigtailed macaques, wild boars, black eagles and hornbills to name just a few. 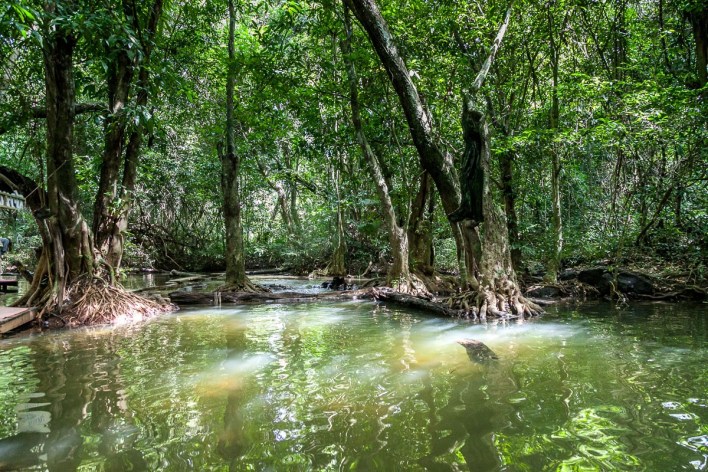 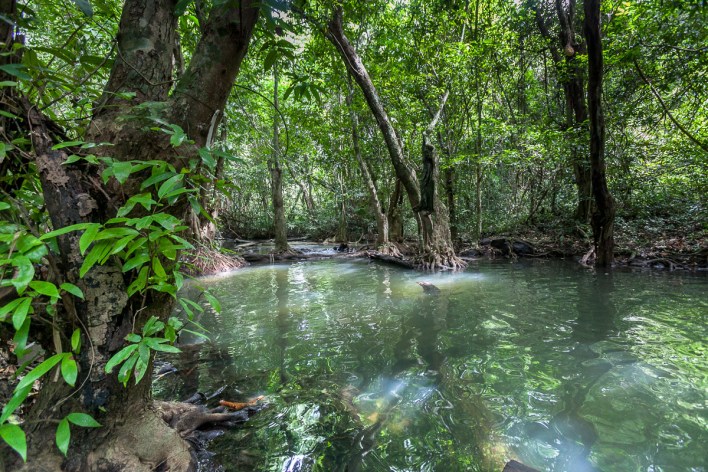 At the northern tip of Nakhon Si Thammarat is Suan Ta San fish spa, where one can have their feet gently nibbled on by the resident fish. Known as a fish pedicure, this serves to remove dead skin and leave a layer of newer skin. 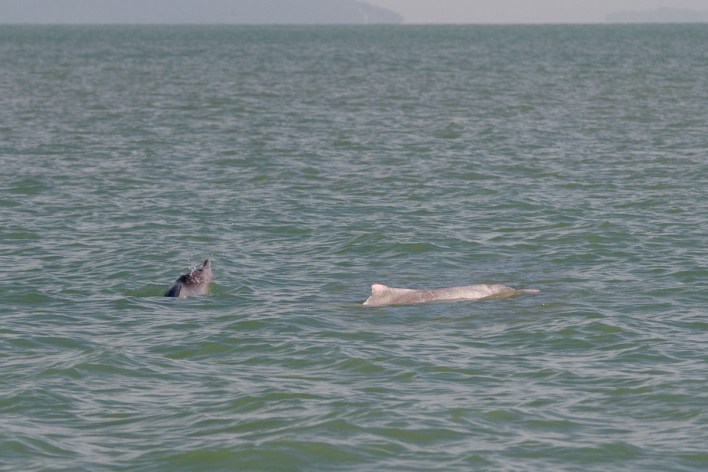 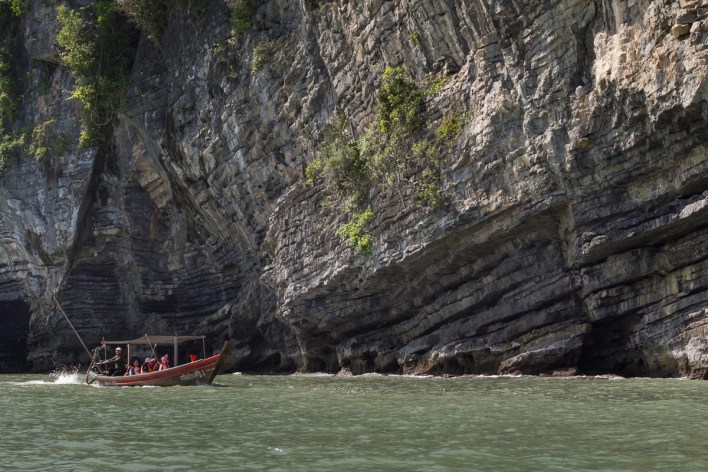 The fish spa is located in the district of Khanom, which happens to also be the location of one of Nakhon Si Thammarat’s most talked about attractions – the pink dolphins. There are said to be only 2,000 pink dolphins left in the world, and 60 of them live off the Khanom coastline and its pristine beaches.

The dolphins are grey when they are born and gradually turn pink as they get older, from a network of blood capillaries just under their skin which help them regulate their body temperature. The local community makes sure the dolphins stay safe through various measures in place, and the local tour boats and fishermen have an agreement to stay at least 50 metres from the animals and to switch off their motors if they come near.

The best time to see the dolphins is in the morning during the months of February to September. A standing request to all visitors wanting to see these majestic animals is to do so with a company that puts the dolphins’ comfort and safety first. 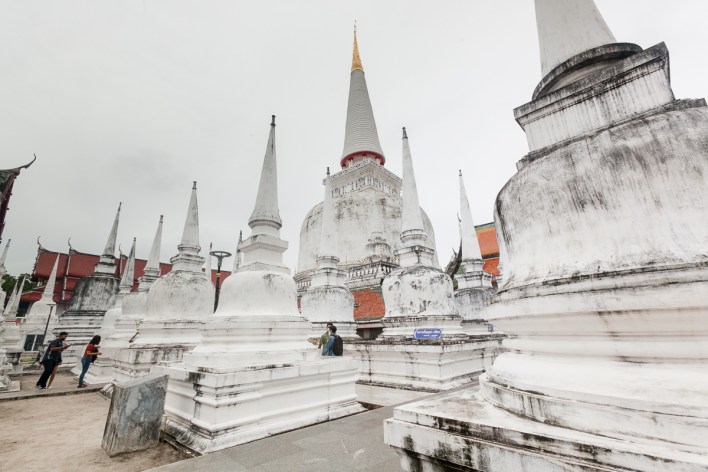 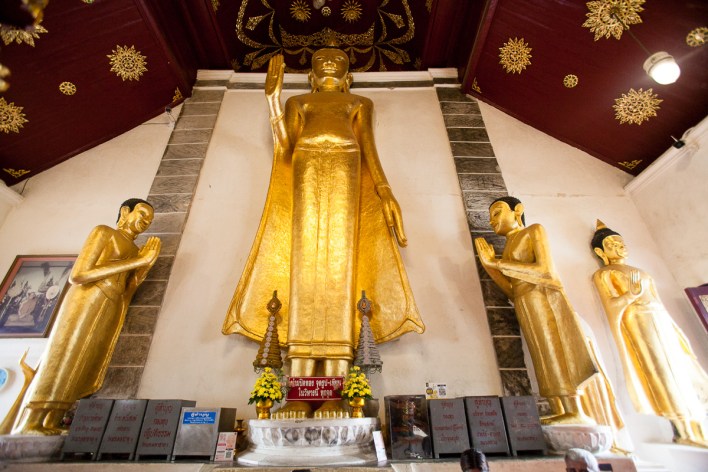 Nakhon Si Thammarat is home to two of the region’s most famous temples, Wat Phra Mahathat Woramahawihan situated in the provincial seat and Wat Chedi Ai Khai in Sichon district about 60 km. to the north. 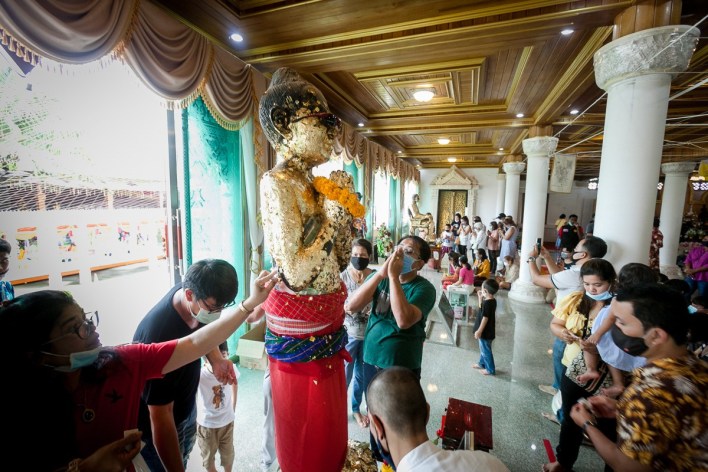 Founded in the 8th century, Wat Phra Mahathat Woramahawihan is considered one of Thailand’s most sacred temples, as it contains a tooth relic of the Lord Buddha. The 78-metre high chedi is surrounded by 173 smaller ones, and there is a collection of Sukthothai-style Buddha statues and splendid murals that depict Ramayana characters. 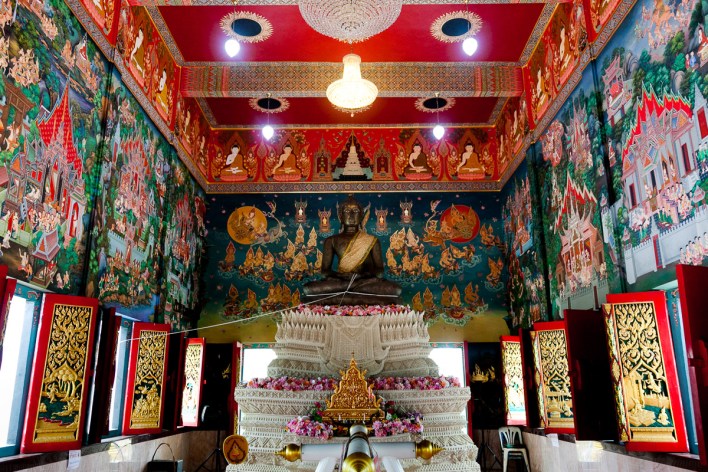 Wat Chedi Ai Khai is widely known for the legend of Ai Khai and the statue of a 9-10 year old boy to which people make offerings and worship. It is said that many people have had their wishes fulfilled by Ai Khai’s spirit. The temple is also known as the chicken temple thanks to the various chicken statues that can be seen.

Phatthalung boasts a wonderful attraction for bird lovers and indeed anyone who appreciates serene nature spots. Situated about 30 km. north of Phatthalung town is the country’s largest waterfowl reserve, called Thale Noi which means ‘little sea’. This 460 sq. km wetland is listed by the International Union for Conservation of Nature (IUCN) as a protected area, while a section of the Thale Noi Non-Hunting Area is protected under the Ramsar Convention, an international treaty for the conservation and sustainable use of wetlands around the world. 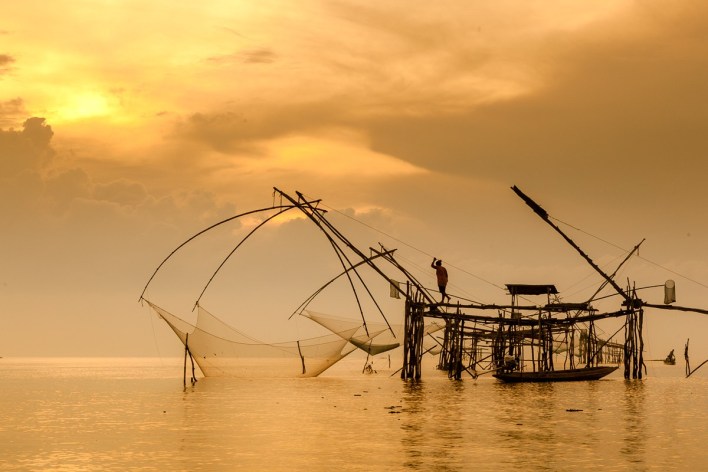 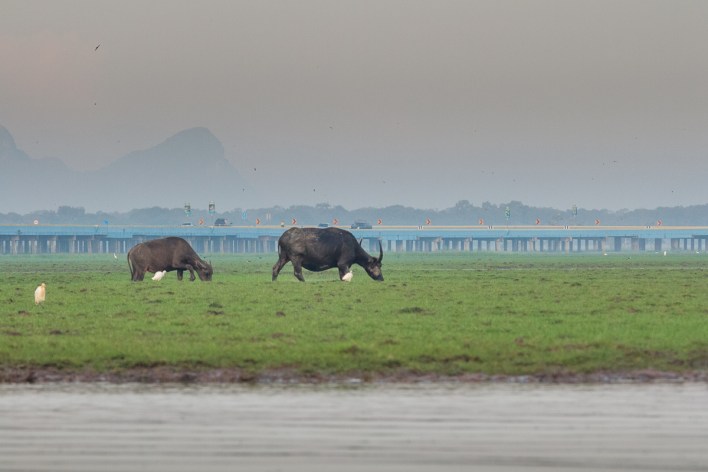 The birdlife at Thale Noi is year-round but most abundant between November and March, with flocks arriving from places as far away as Siberia. Prevalent among the over 180 species of local and migratory birds these wetlands support are herons, storks and purple swamp hens, while rarer species include the Cotton Pygmy Goose, Bronze-winged Jacana and Brahminy Kite. The long-tail boat rides on offer to birdwatchers are best taken in the early morning and late afternoon, not least of all to avoid the scorching midday sun. 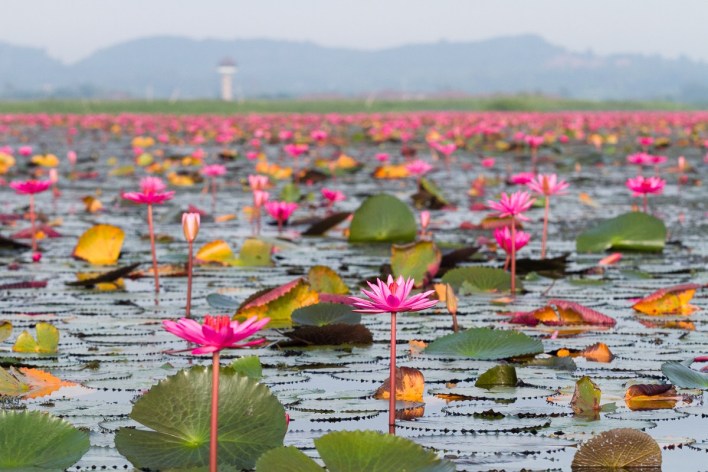 In addition to the bird life, Thale Noi is home to various species of mammals, reptiles, fish and amphibians some of which are listed on the IUCN Red List of Threatened Species. Among these are the Southeast Asian Box Turtle and Giant Asian Pond Turtle, Asian Small-Clawed Otter, Asian Water Monitor, Elephant Trunk Snake, Reticulated Python, Crab-eating Macaque, Malayan Horseshoe Bat, Javan Mongoose and Plantain Squirrel.

From nature to culture, Phatthalung is also known for its attractive and increasingly sought after sedge weaving products that range from baskets and bags to lamps and handicrafts. Local communities have adapted the traditional art – passed from generation to generation as a form of local wisdom – to incorporate contemporary designs and appeal. 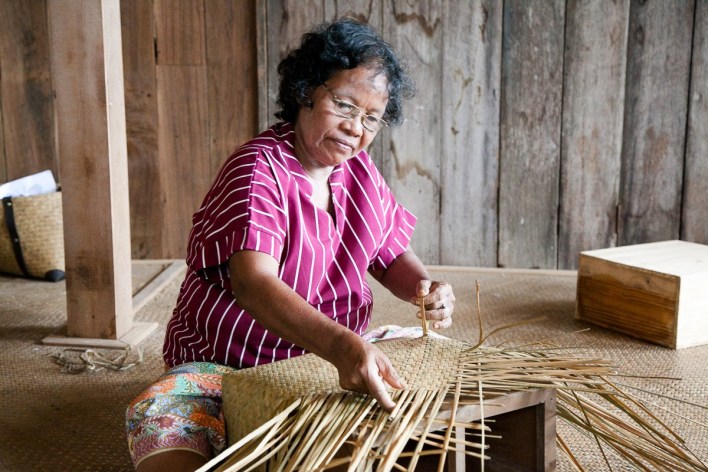 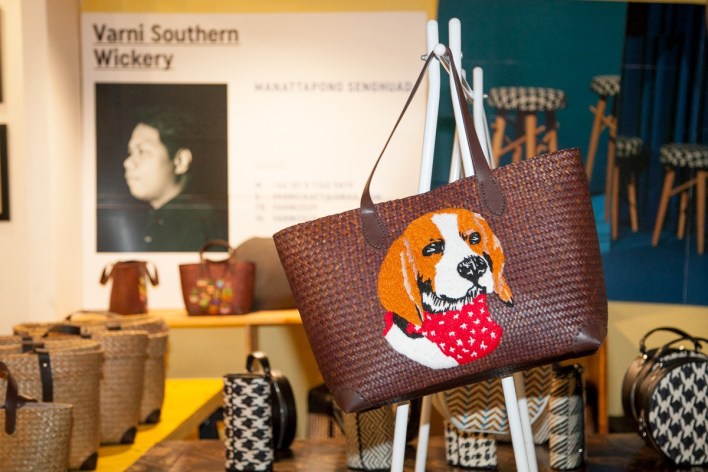 The products are made using natural materials like the Krajood water plant commonly found in the region, and there are various brands available some of which are sold in Bangkok’s top-end department stores. One of these is Varni Craft or Varni Homestay in Khuan Khanun district near Thale Noi, where guests can enjoy cosy accommodation and learn about the Krajood art including making their own items. 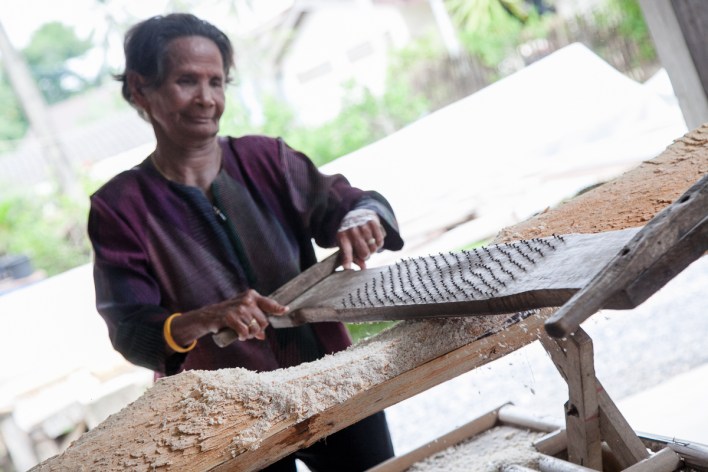 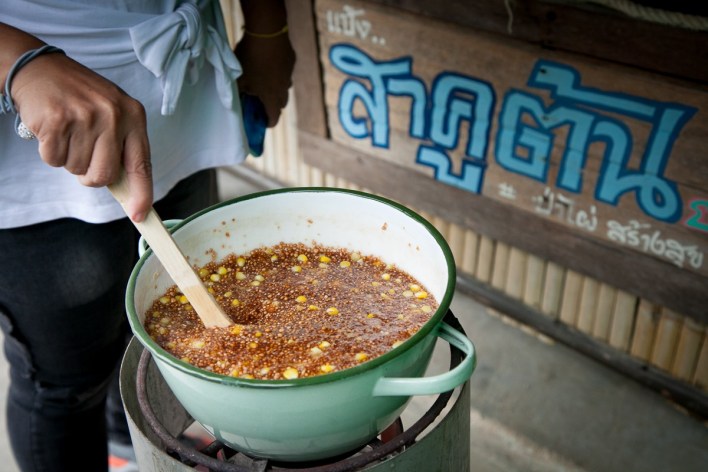 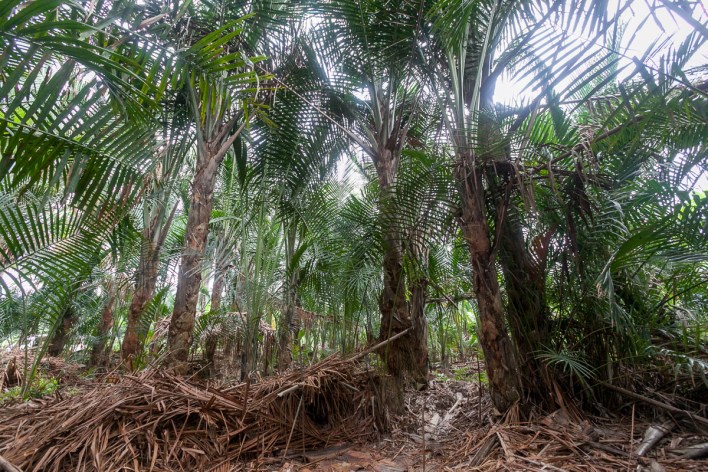 Another popular product of Phatthalung is Yai Chui Ban Hua Phru sago flour, made from Metroxylon sagu, which is a species of palm native to the tropical Southeast Asian region and Thailand. Located roughly midway between Thale Noi and Phatthalung town is the Sago Flour, Grandma Chui, Ban Hua Phru Centre where visitors can buy desserts and other snacks and learn about the process in which these delicious goodies are made from the sago tree. 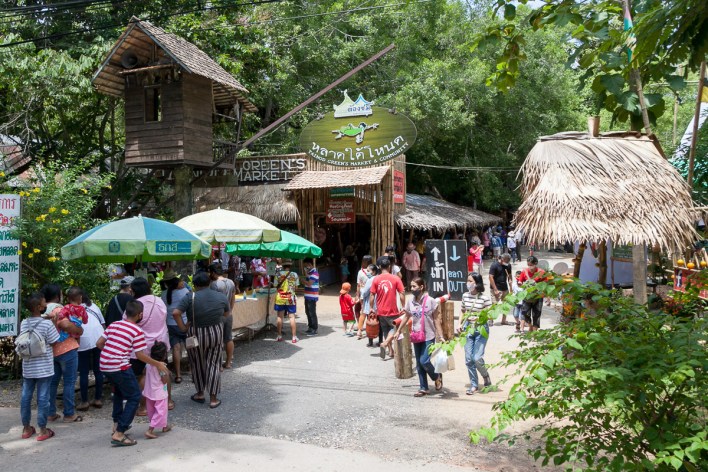 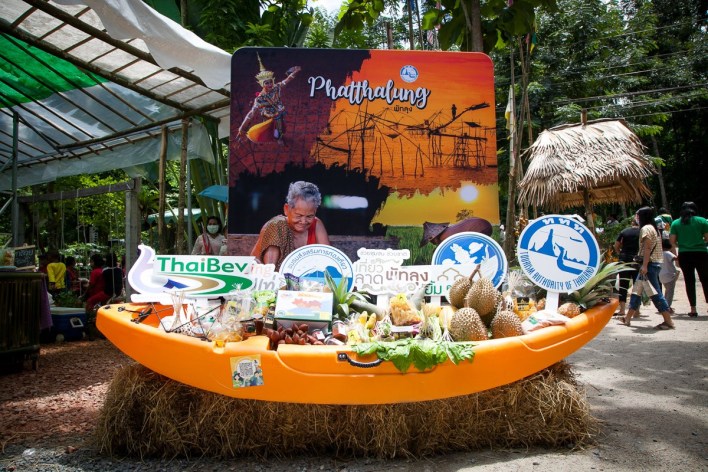 For those who happen to be in Phatthalung town on a Sunday, Tai Not Green Market takes place from around 9 a.m. through to the late afternoon, with vendors selling handicrafts and delicious street food cuisine like noodle soup, Thai desserts and Thai coffee, fresh fruit and curry with rice. Stalls are made of bamboo and there is a relaxed nature feel to the occasion. 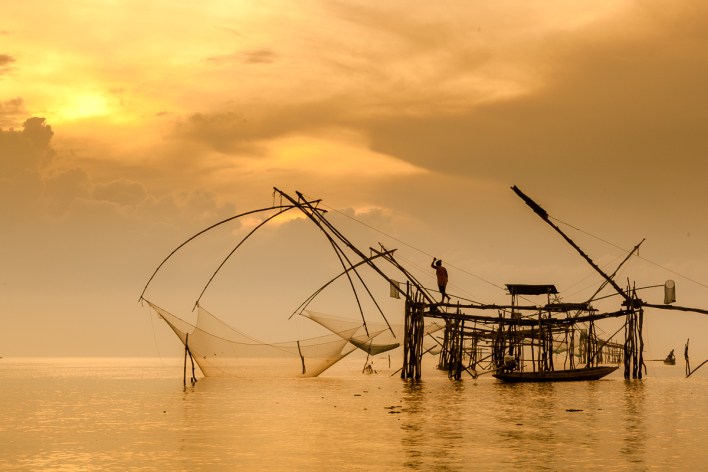 When it comes to temples, Wat Khuha Sawan is the most important temple in Phatthalung town. First used for religious ceremonies around the 8th-10th centuries, this temple stretches over a pair of crags with caves and viewpoints to boot while a mossy stairway leads to a hilltop viewpoint offering views over the town and beyond.