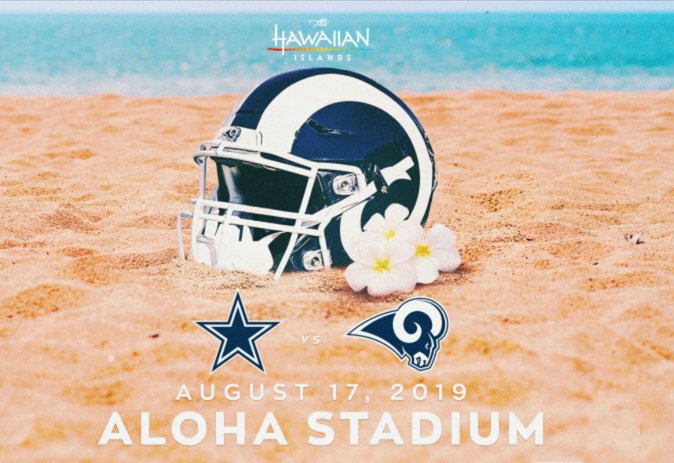 The Los Angeles Rams will host the Dallas Cowboys on Saturday, August 17, 2019 at 4PM HST at Aloha Stadium in Honolulu, it was officially announced today. Tickets are now available on TheRams.com/Hawaii and can be purchased on-site at Aloha Stadium.

The preseason matchup will be the first time the NFL has played an exhibition game at Aloha Stadium on Oahu since 1976. Before moving to Orlando in 2016, Aloha Stadium served as the host site for the Pro Bowl every year with two exceptions since 1979.

Through the support and partnership of Hawaii’s tourism industry, the Rams will provide various community engagement opportunities for youth in the islands. In advance of the preseason matchup, Rams players and staff will host an 11-on-11 Tournament & Skills Competition that will feature 16 Hawaii high school football teams. The event will include a character education session and will aim to build camaraderie and promote the game of football in Hawaii. During the week leading up to the game in August, Rams cheerleaders and mascot, Rampage, will visit local schools to host PLAY 60 events and create lifelong memories while encouraging youth to be active for the recommended 60 minutes every day.

In addition, as part of the Rams’ year-round military appreciation efforts, the team will bring its PLAY 60 Military Base Tour to the islands to support the military community and to honor, empower, and connect with Hawaii-based service members, veterans and their families.

In November 2018, the Rams began partnering with Hawaii’s tourism industry, which included a special Hawaii-themed presenting sponsorship of the Rams-Seahawks game at the Los Angeles Memorial Coliseum.